Around 2010, the experience of building standalone apps had shown that it was possible to create UFO-based macOS apps in Python, and most of the pieces needed for that were already available as open-source libraries.

In a UFO-based workflow with several specialized apps, the dependency of FontLab as a central drawing environment had created a bottleneck – it required back and forth conversion between UFO and .vfb, which was cumbersome and slow. Customization options in FontLab were also very limited – only a subset of its API was available in Python, and not in a object-oriented way which allowed subclassing and reuse.

With the advent of webfonts in 2009 and the greater demand for screen fonts, a new interest in TrueType hinting was sparked. Petr van Blokland was one of the partners in WebType, one of the newly established webfont providers. He was interested in developing a TrueType hinting tool for macOS that could be integrated into a UFO-based workflow. But because of the low-level nature of TrueType hinting, building such a tool would require access to a font editor’s internals, and that was not possible with FontLab at the time.

Without time to build such an editor himself, Petr approached Frederik Berlaen – who had been his student at TypeMediaPost-graduate course in typeface design at the Royal Academy of Art (KABK) in The Hague, Holland., and whom he had seen build Kalliculator within a year – and asked if he could build a simple, scriptable font editor which could serve as the basis for his hinting tool. Frederik accepted the challenge, and that font editor became RoboFont.

RoboFont marks a new approach to creating a scriptable font editor: instead of adding Python to an existing font editor, a new font editor was built entirely in Python.

Standing on the shoulders of giants

Many of the necessary building blocks were already available as open-source libraries. The backbone of the application was built using with defcon, which makes the font objects accessible to the interface and takes care of sending notifications to all registered observers. The interface was built using vanilla and defconAppKit, which provides several font-specific UI components such as the glyph cell view in the Font Overview, the Font Info sheet, parts of the Space Center, etc.

Generating fonts was also another important aspect to consider. In 2010 the AFDKO (Adobe Font Development Kit for OpenType ) was the tool many designers were using to generate their release fonts, as it ensured fonts to run smoothly on the Adobe Suite. AFDKO was freeware, meaning free to use but with a closed source. At the time, AFDKO included some patented software that could not be released to the public. Adobe granted to RoboFont the permission to embed AFDKO into the application. It was an important deal, as it allowed RoboFont to focus more on drawing and editing, and less on compiling features, font tables, and so on.

A lot of new code had to be written to connect the dots. Starting from the Glyph Editor, probably the application component that users spend more time with. An editing window for font design has a set of specific features compared to a regular graphical vector editor – like Illustrator or FreeHand. There are no objects or attributes – like colors or textures – assigned to these objects. Just points and segments or curves controlled by these points. Also, there is no clear context of use, as fonts might be set on a truck or a watch.

To increase the ability of designers to customize their workflow, RoboFont opted early during the development for a rich set of alternate options along with each standard action in the editor. A list of all the available options for a simple action as selecting points on the canvas is a clear indicator of RoboFont’s design philosophy.

The biggest challenge during the glyph editor design phase was the creation of an architecture that could allow such a degree of flexibility. More than 10 years from its initial design, the code underlying the notification system of the BaseEventTool has not changed much. RoboFont is the combination of a set of APIs and a set of preferences, where almost every aspect of the application can be customized by the users.

Internally, the new code was split into the lib and mojo modules – the first containing private tools, the second intended as a public API for use by developers.

RoboFont font objects were created by wrapping defcon objects. The API was copied from RoboFab, so it would be easy to port existing scripts to RoboFont. Several RoboFont-specific methods and attributes were also added. Following RoboFab convention, the ‘native’ defcon objects were available with obj.naked().

A new code library, booleanOperations, was developed around the open-source PyClipper in order to provide boolean operations with contours, which are essential to any vector editor. A new API for boolean glyph math was added to the glyph objects.

RoboFont was designed from the ground up to be scriptable and extensible. Since the beginning, the idea was to create a very basic core app which could be extended with ‘plugins’ written in Python. RoboHint was the first example of such a plugin, but many more followed.

An extension package format was created to make it easy to install and share extensions. Plugins are loaded on startup and can add themselves to the RoboFont UI. Because most RoboFont APIs are scriptable with Python, the space of possibilities is huge.

The original RoboFont documentation was written by Frederik, with some assistance from Ben Kiel and Gustavo Ferreira. It consisted of an introduction into the ideas behind RoboFont, a description of the interface, and a reference of the API. A RoboFont user forum was also created for support and questions. 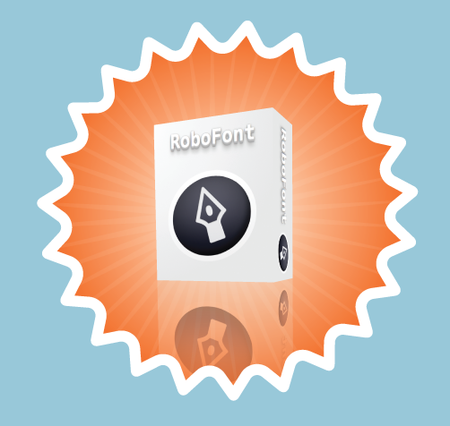 After 18 months in development, RoboFont was officially released in September 2011 at the ATypI Conference in Reykjavik, Iceland. The reception was overwhelming. Some people were puzzled by the apparent “lack of features” in comparison to other font editors.

In the early 2010s, getting RoboFont working across a wide range of macOS versions was quite problematic. Versions from 1.0 and 1.8 did not introduce many new features, but fixed and corrected a lot of bugs and compatibility issues.

Mechanic – the RoboFont extension to manage RoboFont extensions – was conceived and developed by Jack Jennings. Released in 2015, it quickly became an essential tool for many RoboFont users. It established a bridge between extension developers and designers, and stimulated the creation of more and better extensions. Today Mechanic hosts nearly 100 open-source extensions by 30 different authors.

RoboFont 2, the app that never was

RoboFont 2 was an intermediate step between RoboFont 1 and RoboFont 3 which never saw the light of day (the beta version is a rare collector’s item).

With the end of life date for Python 2.X coming near, it was necessary to undertake the upgrade to Python 3. The experience upgrading the simpler DrawBot to Python 3 served as the final encouragement. The main problem consisted in updating all the building blocks used to build RoboFont, more than the application itself. At the same time, the jump from UFO2 to UFO3 was underway, and – as any change altering existing data structures – it had to be performed with extreme care.

RoboFont had already support for many of the features introduced by the UFO3 format, like images or layers. The data was stored “privately” into UFO libs. Thanks to UFO3, this kind of data gained a proper place in the file format. RoboFont needed to re-wire its inner workings to the new file format.

For a complete list of changes from ufo2 to ufo3 changes, you can check the format specification website

Having both Python and UFO in version 3, it seemed fitting to bump the RoboFont version to 3 too.

The jump to UFO3 was also a good opportunity to update defcon, the underlying layer used to manage UFO structures. The update affected mostly the notification system, which became far more detailed. defcon’s update – considered its low-level position in the UFO ecosystem – caused an incompatibility with RoboFab, the well-known scripting API. RoboFab was initially structured to wrap the FontLab Studio 5 Python API, and it had a substantial amount of legacy code which was not considered worth maintaining.

«New font editors came along. New font formats came along. New ideas came along. RoboFab was not built in a way that made it easy to add all of these new things while making the old things keep working. We tried, hard, to make it work, but it wasn’t possible. We decided that the way forward was to start over from scratch. That idea became FontParts»

This was a good opportunity to re-think what a UFO-oriented scripting API should look like. The FontParts API is also structured in a way that allows other applications to easily implement it.

The waterfall of updates had major consequences for users, forcing them to update their files and tools in a short period of time. To facilitate this process, the RoboFont team prepared a conversion cheat sheet, and an extension to automate part of the process.

Mechanic stopped working in Python 3 and required a complete rewrite. Mechanic 2 introduced a different architecture with extension metadata stored in centrally in the Mechanic 2 server. A much more flexible system which allowed multiple streams of JSON data.

The only RoboFont 3 that works on Big Sur.

A complete rewrite of all the drawing to screen happening in the glyph view.

Rework of the documentation: reorganisation of content sections, more introductory material and tutorials.

The pre-history of RoboFont The UFO format
☰
RoboFont
Tags