While other kerning tools and methods exist, the general principle of grouping glyphs based on their left/right shapes and adjusting pairs is the same.

Some tips before you start

Drawing and spacing come before kerning. Kerning should not be used to fix drawing or spacing problems. Because of that, kerning is usually done towards the end of the design and production process.

Too many kerning pairs is usually a sign of bad spacing and bad font engineering: it makes font files larger and typesetting engines slower. The bigger the character set of the font, the more it pays off to keep groups and pairs to a reasonable minimum.

The kerning process involves the following main steps, which can be repeated iteratively until you’re satisfied with the result:

Let’s have a closer look at each one of these steps.

The logic behind the definition of kerning groups is simple: glyphs which share the same left- or right-side shape belong together in the same group. Of course, shape similarity depends on the typeface we’re working on.

As a reference, let’s have a look at kerning groups extracted from real fonts.

For clarity, the groups have been simplified to show lowercase and uppercase latin glyphs only. Accented letters, ligatures, etc. are not listed below, but should also be included in each group. The fonts also contain other groups (for punctuation characters, non-latin alphabets, etc.) which are not shown here.

The first example is a serif text typeface: 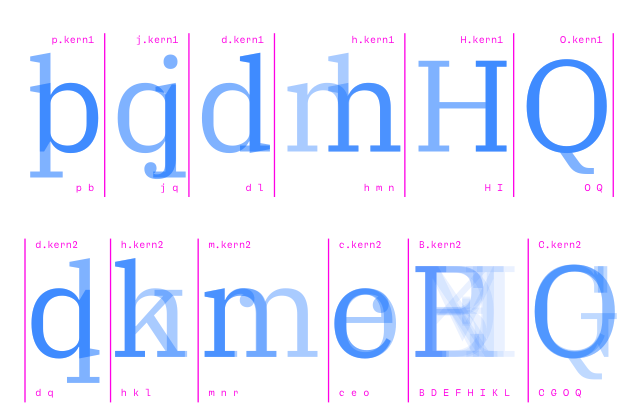 The second is a sans-serif design: 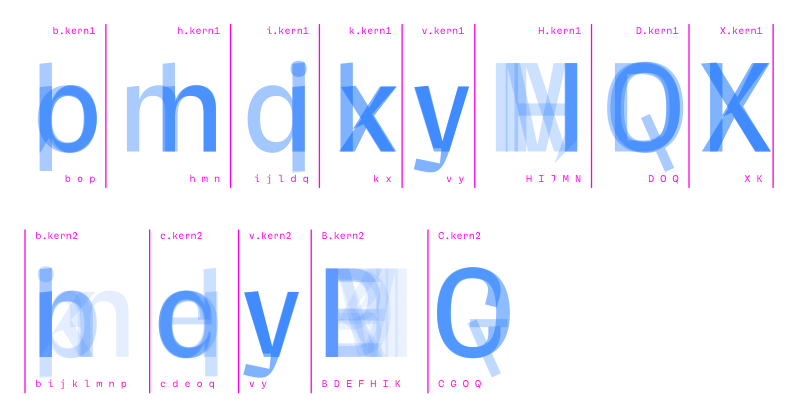 Applying the same method to other typeface styles will produce different patterns. What’s important here is the general principle of grouping glyphs based on their left- and right-side shapes.

Kerning groups can be created and edited using the Groups Editor: 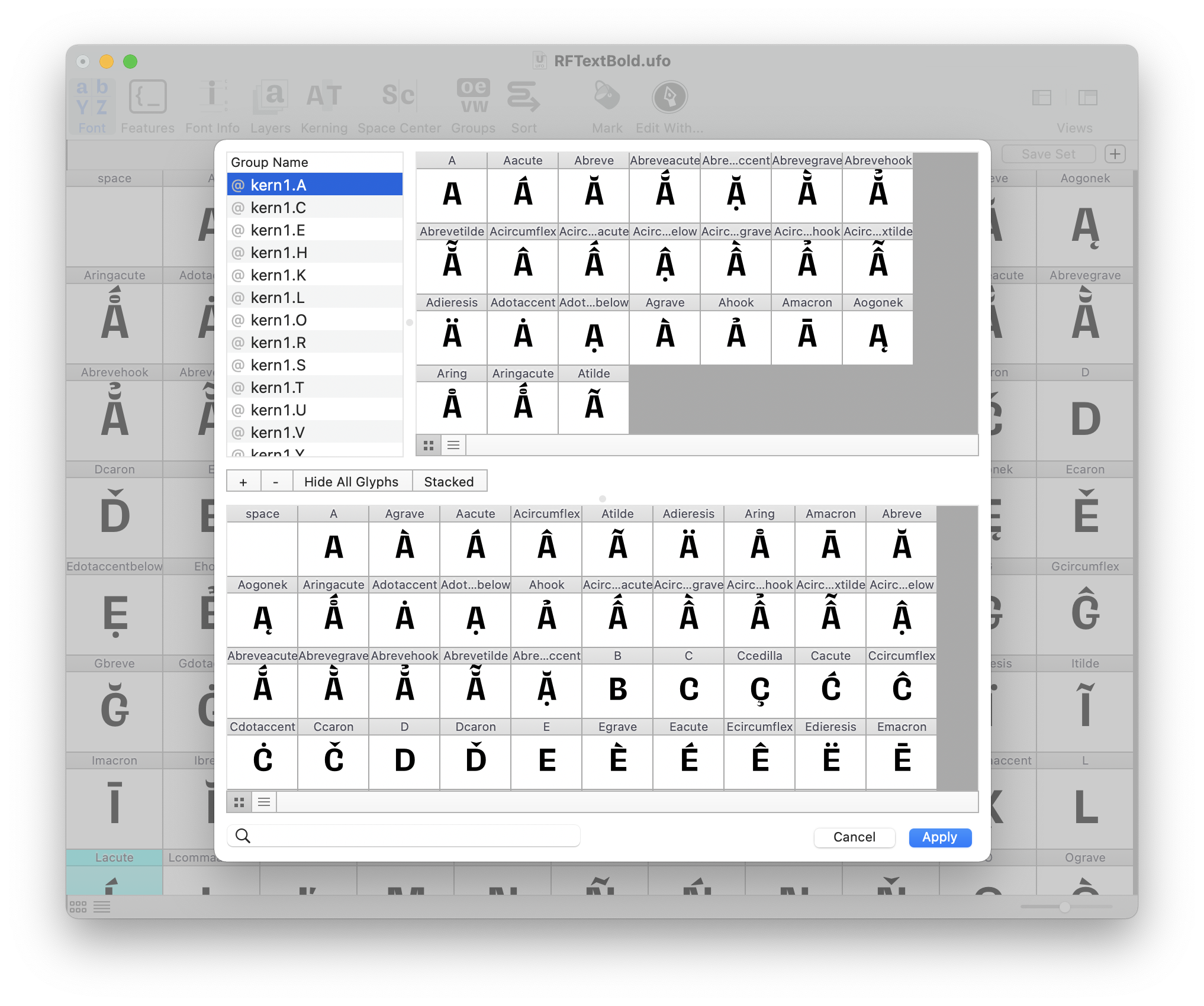 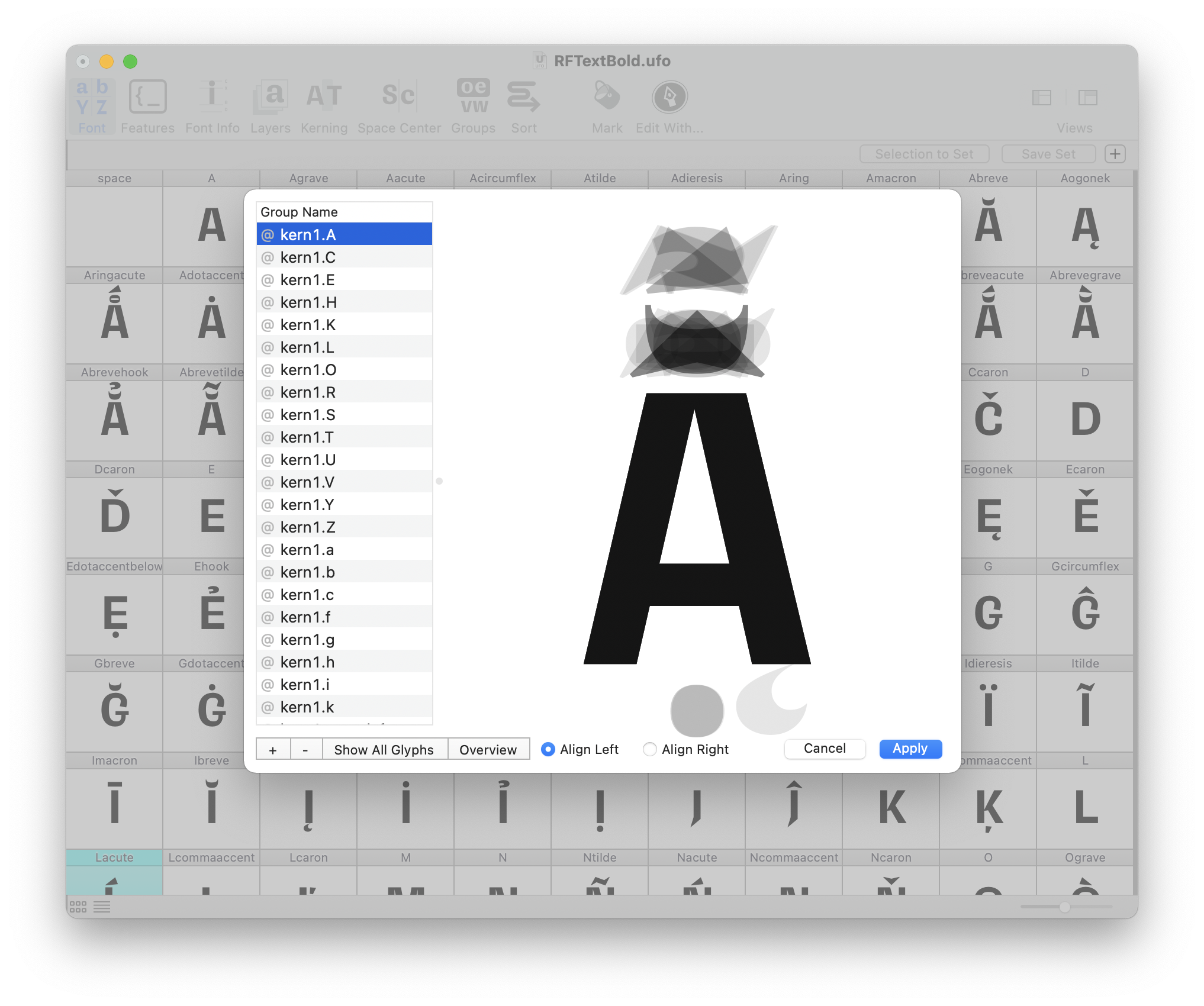 Once the kerning groups have been defined, we can move on to determine which combinations should be kerned, and by how much. There are basically two approaches to that:

It’s easy to find lists with the most commonly used kerning pairs. We can also create our own lists by analyzing kerning in a set of fonts. Here’s an example:

advantage
A pre-defined list speeds up the process by directing our focus to the most problematic pairs.
disadvantage
There may be other pairs in the font which need kerning, and are not included in the list – we will not be able to spot them.

A more systematic approach is to test all combinations between different categories of glyphs: uppercase/uppercase, uppercase/lowercase, lowercase/punctuation, etc.

Some combinations will only rarely appear in text. For example, pairs between lowercase/uppercase or pairs between letters and figures – is it worth to kern them? Something to think about and decide.

Here’s a table showing combinations between the main glyph categories. This helps to visualize which types of pair should be kerned, and which ones could be skipped.

disadvantage
This method takes considerably more time, since we need to go through all combinations in order to decide which ones to kern.
advantage
The advantage is that, once we’re done, we’ll have covered all relevant combinations. Nothing is left out.

Kerning pairs can be created and edited in the Kern Center. It’s also a good idea to have the Space Center open, in order to preview each pair in context of other characters. Here’s a suggested workflow using both windows:

Kerning in UFOs can be previewed in the Space Center if the Show Kerning is selected in the display options menu.

If the option Show Metrics is selected, the kerning values will be displayed between glyph pairs if available.

There are several techniques to proof kerning, inside or outside RoboFont. Here are two examples.

You can use the Feature Preview extension by Frederik Berlaen. Remember to check the kern checkbox to activate kerning. 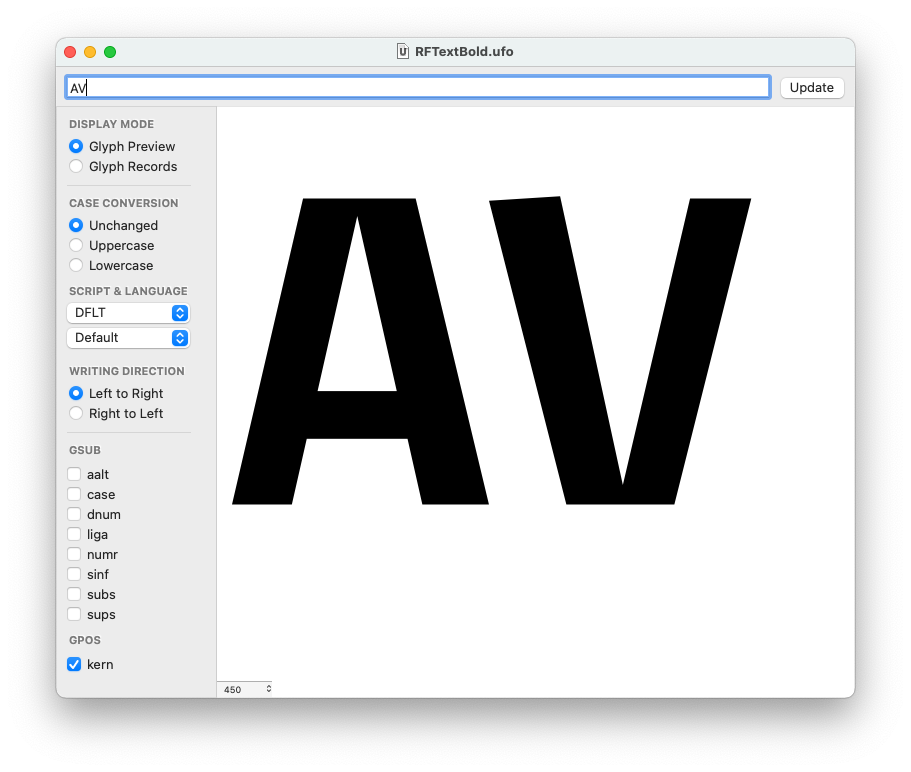 You can use the FontGoogles application to proof your kerning. It is a desktop application for macOS by Just van Rossum, free and open-source. 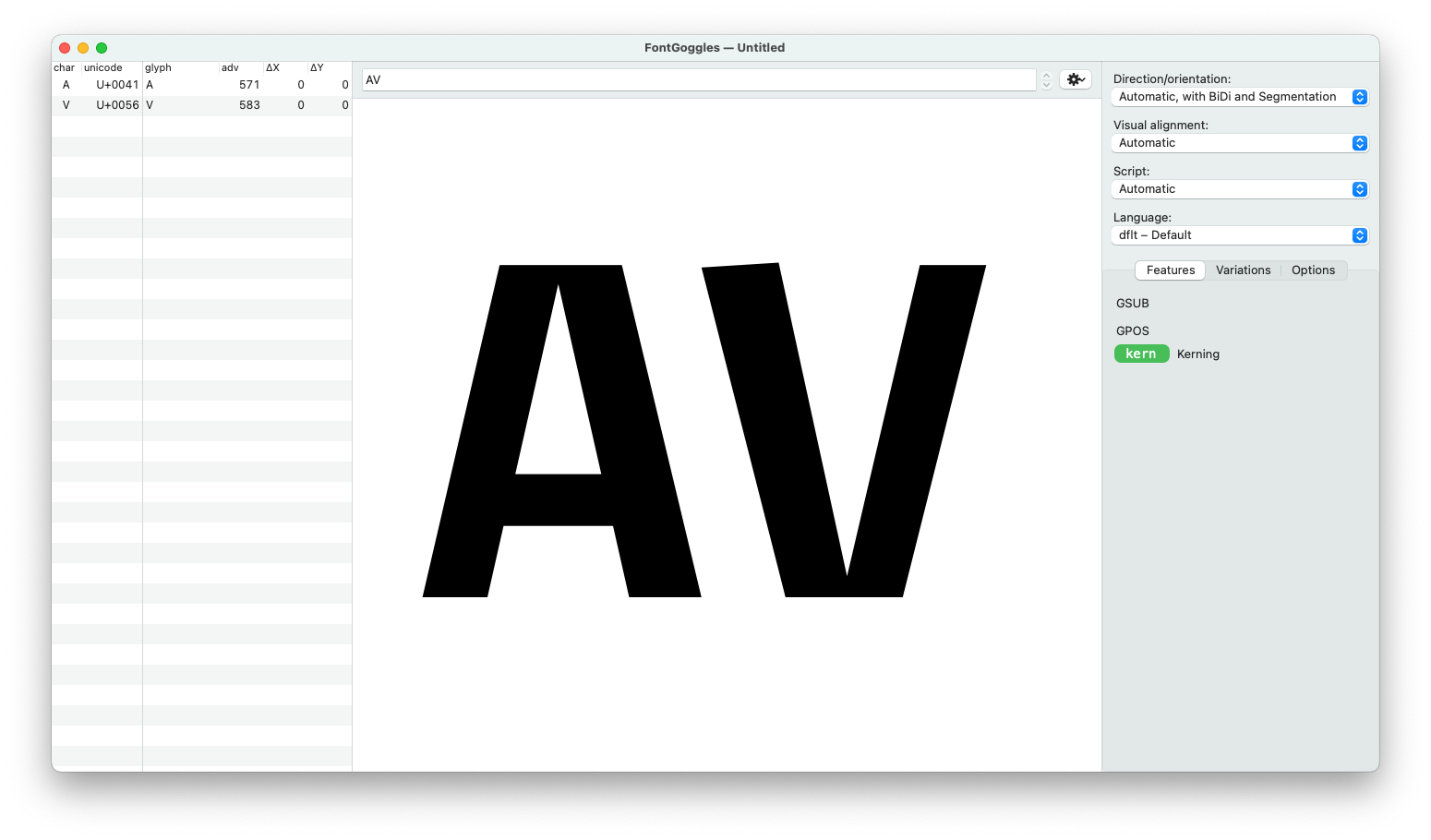 If you feel the urge to program your own solution, RoboFont is the right place to be. You could test install the font on your machine and typeset some text using the Drawbot extension inside RoboFont. Of course, you can install it with Mechanic2. 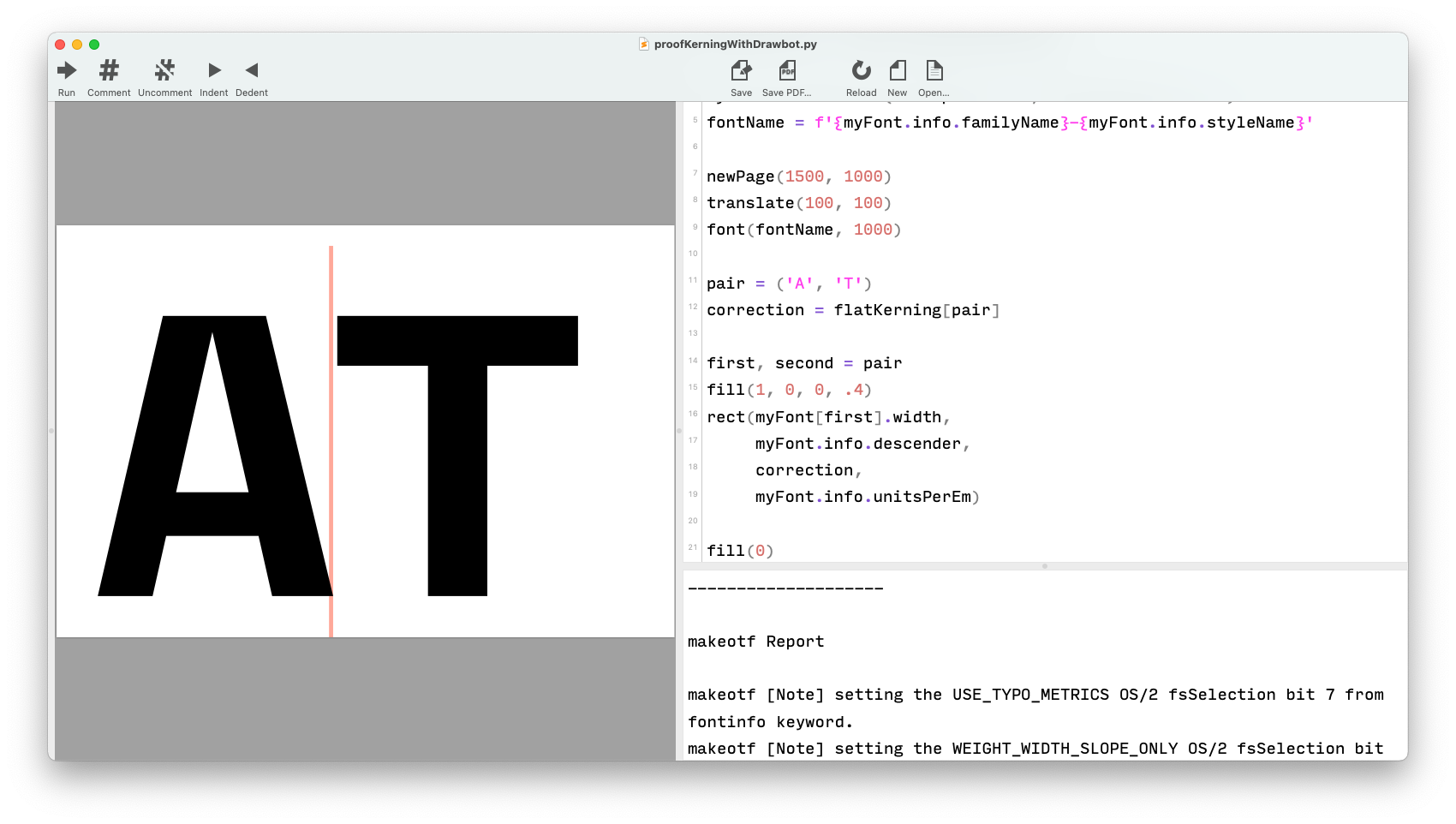