This page describes the process of creating a simple font from scratch.

No matter how big are your goals for a given project – it is usually a good idea to start small, make sure that the basics work first, and only then expand it. When making fonts, it easier to experiment and be creative while the font is small; the larger the font, the more ‘expensive’ it becomes to make significant changes.

What makes a minimum viable font probably varies from designer to designer. For the sake of this tutorial, it will be a plain style containing only the basic ASCII character set. At the end of the process, we will produce an OpenType font which we can use to set some text in any app.

Setting up the font file

To create a new font, choose File > New from the Application Menu.

The font doesn’t contain any glyph yet – the greyed out cells are just template glyphs. 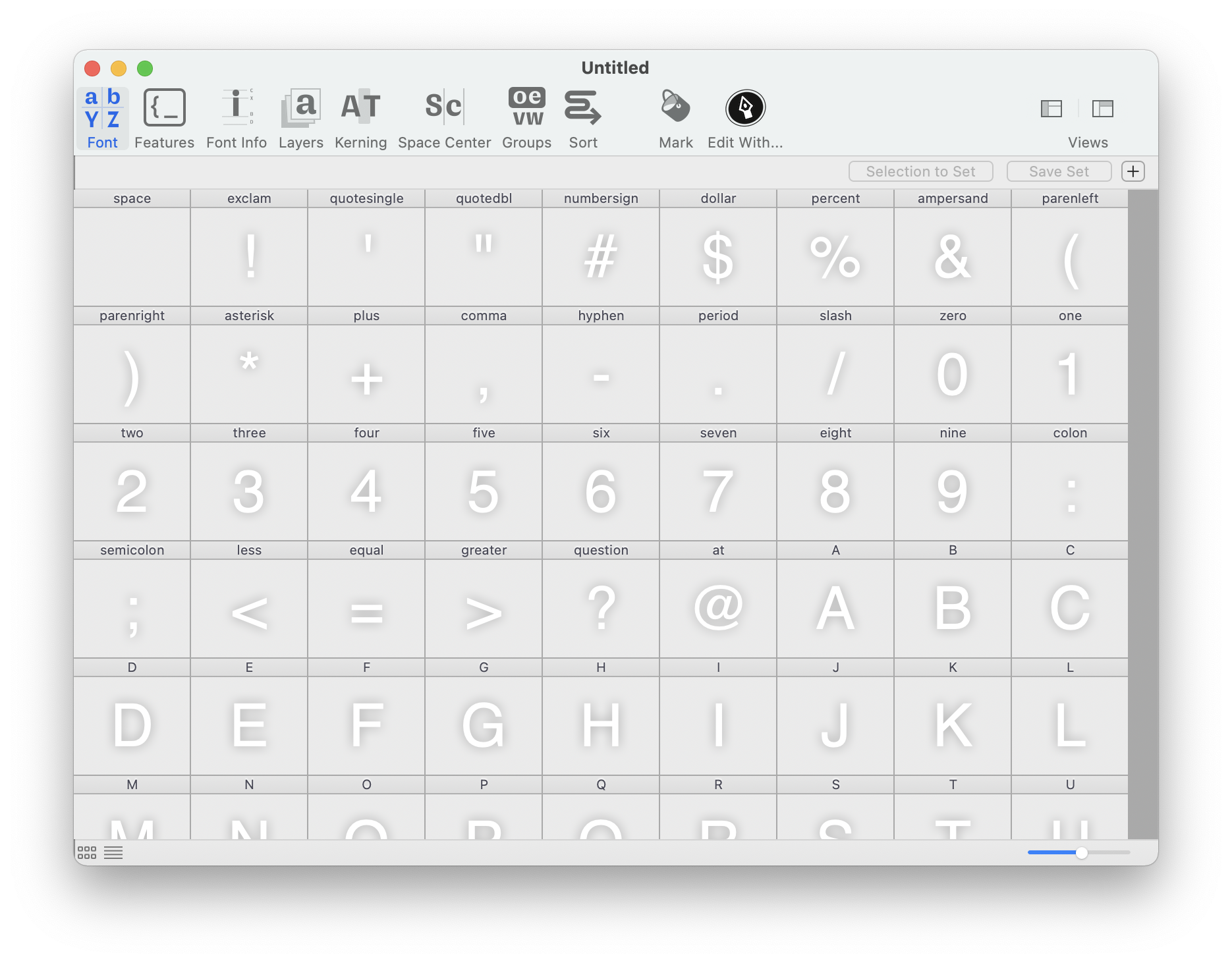 Give the font a name

In the General tab, give the font a family name and style name.

You can leave everything else untouched and trust the defaults for now. 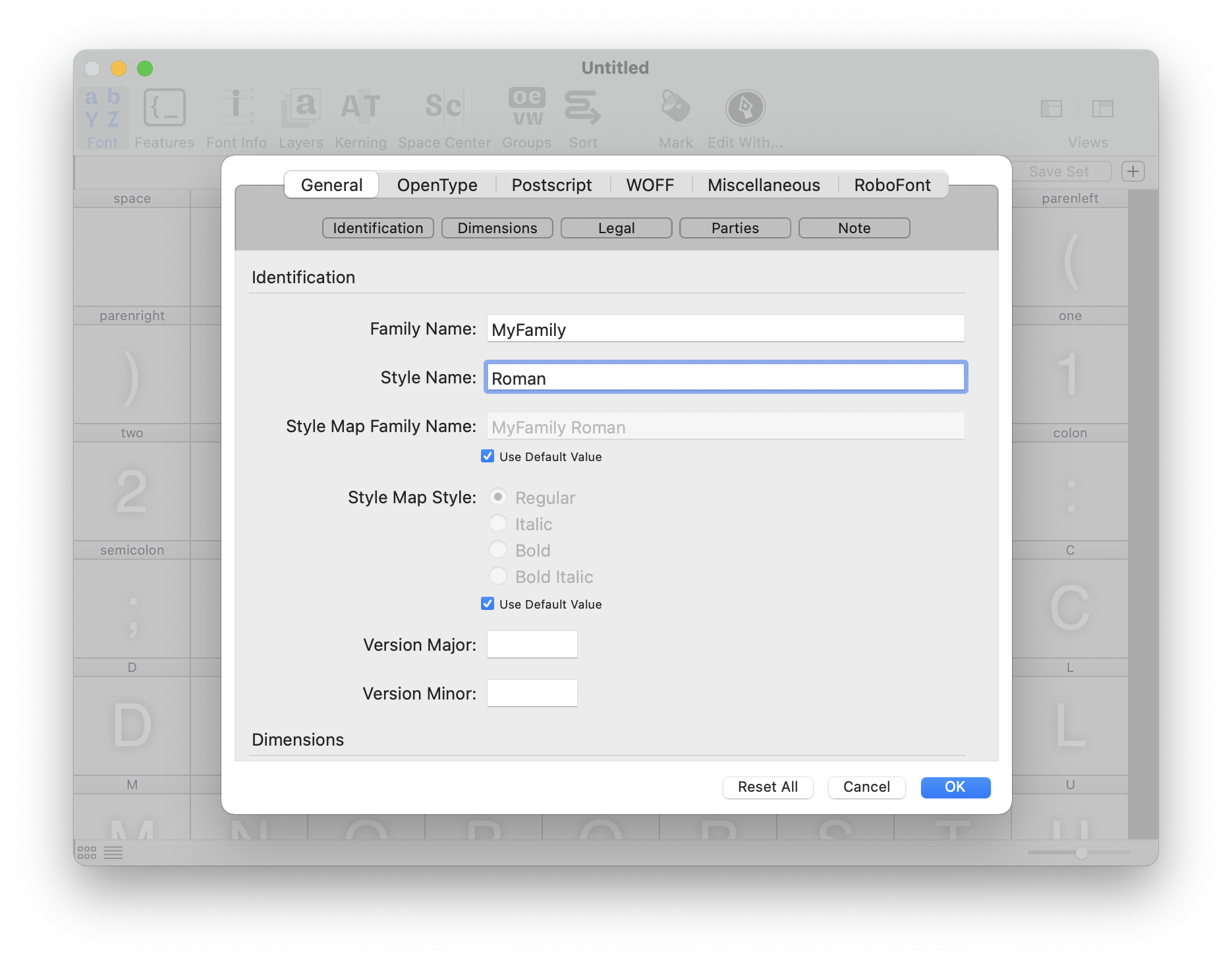 To create new empty glyphs for all characters in the ASCII character set, open the Add Glyphs sheet (use the menu Font > Add glyphs or the keyboard shortcut ⌃ ⌘ G).

Copy the list of ASCII glyph names below, paste it in the main text area, and click on the Add button to create the glyphs.

The template cells will change color to indicate the new empty glyphs. 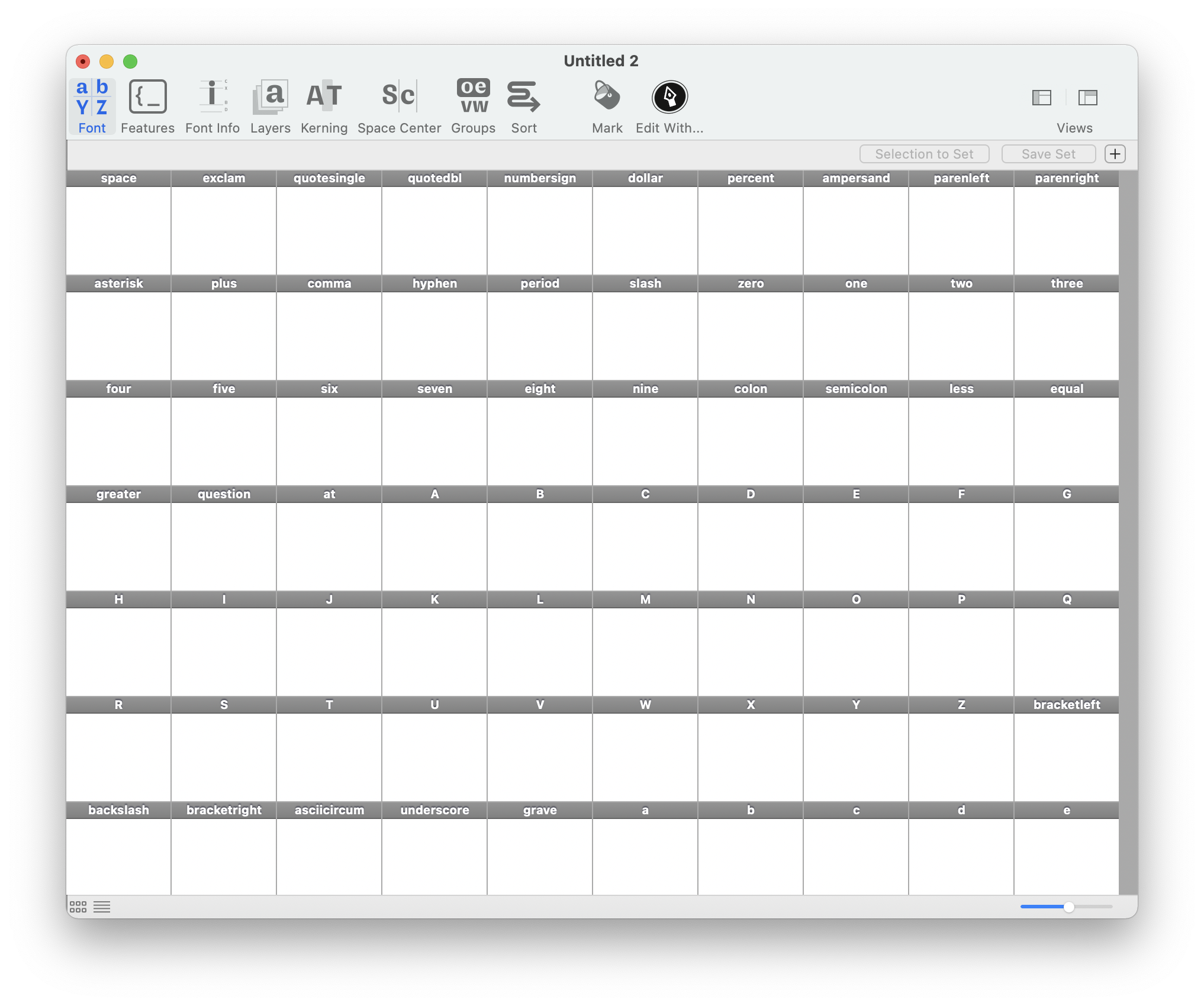 Save the font file

Save your font in a new folder somewhere on your computer. 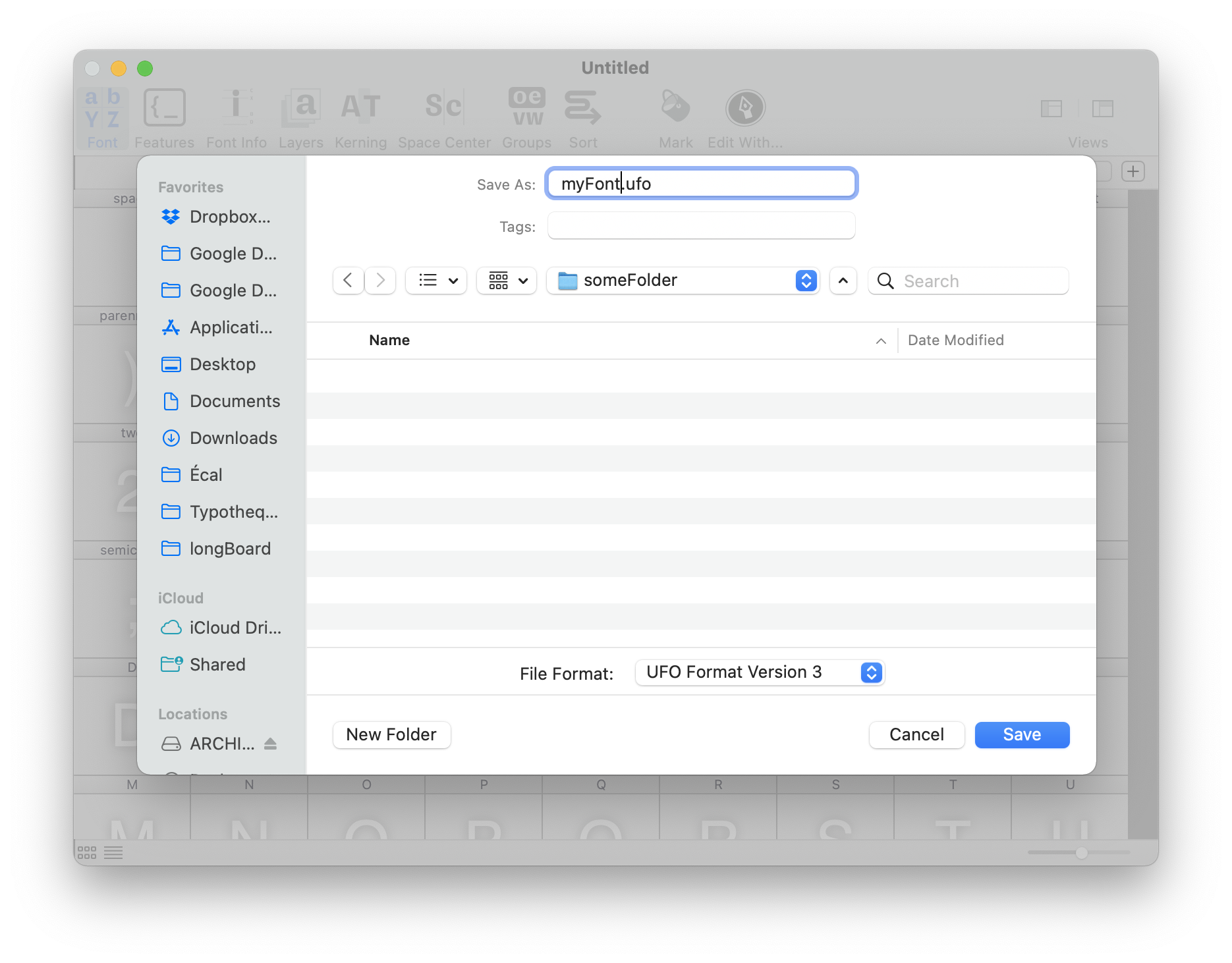 By the end of this tutorial, this folder will also include the generated OTF font and a PDF proof.

Now that our font is set up, it’s time to dive in and draw all those glyphs.

Drawing is done in the Glyph Editor. Double-click any glyph cell in the Font Overview window to open it and start editing that glyph. 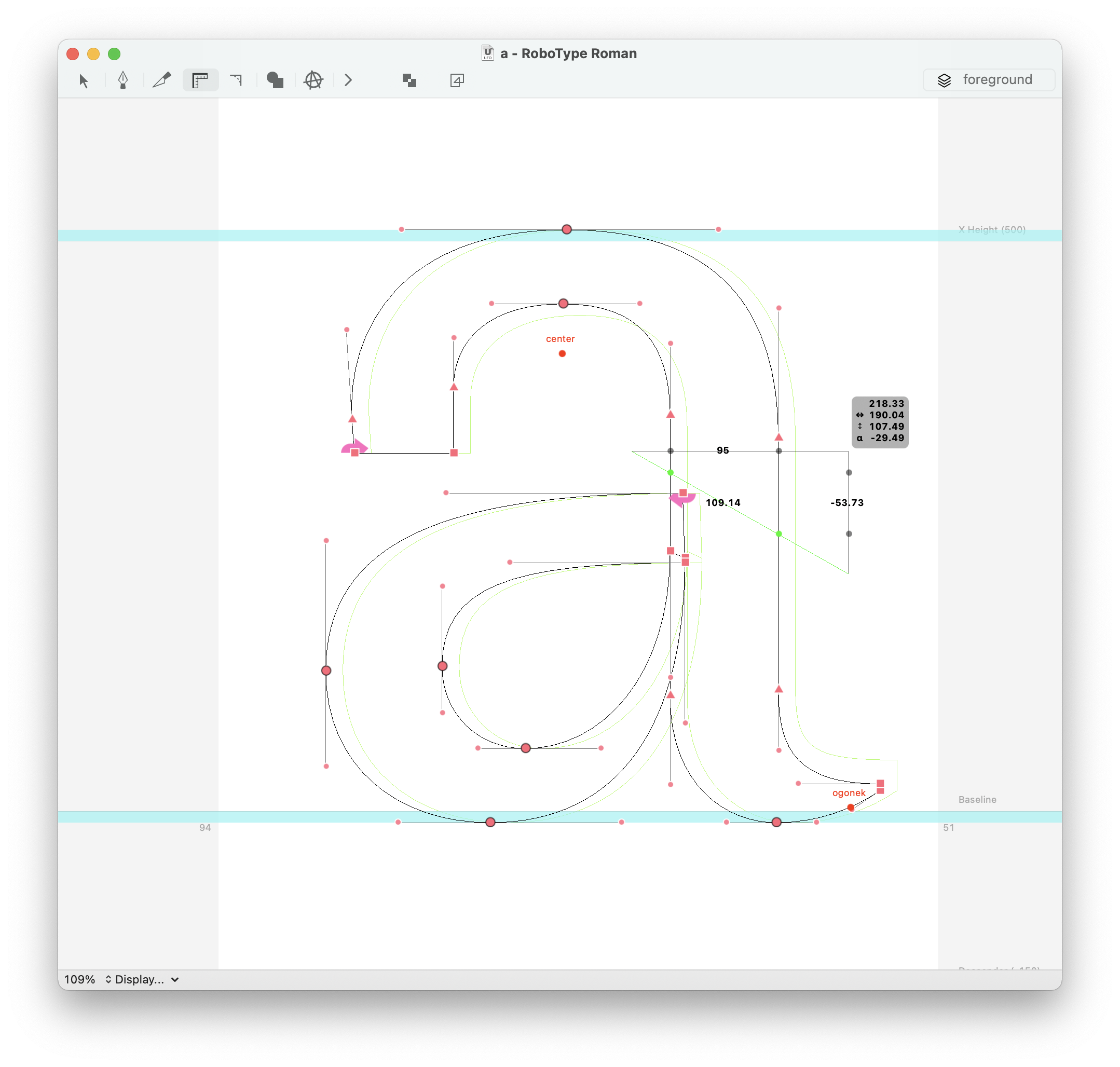 RoboFont offers several tools for drawing and editing glyphs, and many more are available through extensions.

There is a lot to say about drawing – see these separate pages:

Spacing and drawing are usually done together – the space inside the glyphs and the space between the glyphs are defined in relation to each other.

Spacing is done in the Space Center. There are multiple ways to open it: using the icon in the toolbar, using the short keys ⌥ ⌘ S or choosing Window > Space Center from the main application menu. 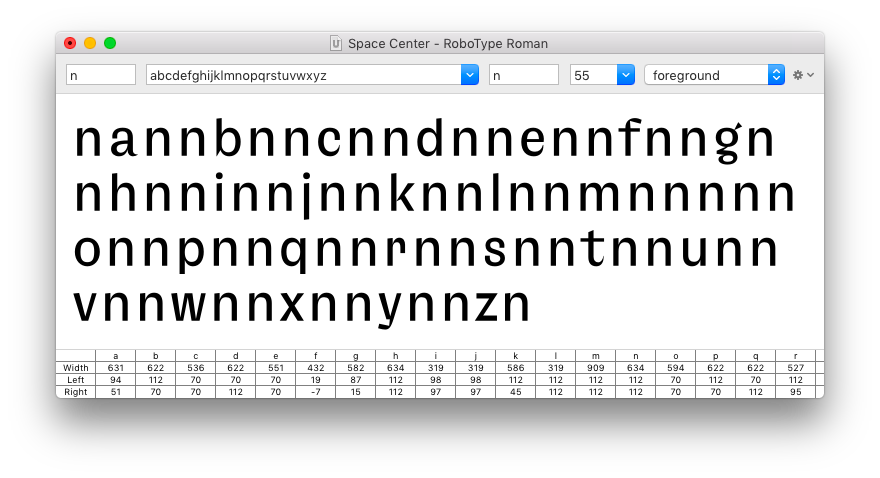 It is important to quickly preview actual text in the font while designing in order to evaluate the drawing and spacing in context.

The Space Center allows us test small passages of text directly from the UFO. Different kinds of text can be used to test different aspects of text. For example, pangrams allows us to view all characters in the alphabet in a short sentence. Emil Ruder’s lists of ‘problematic’ and ‘non problematic’ words are well known among typeface designers. More recently, Jonathan Hoefler published his own texts for proofing fonts.

The DrawBot extension can also be used to generate PDF proofs directly from the UFO:

To preview longer passages of text, or to proof OpenType specific features it’s recommended to generate an OpenType font. (see below)